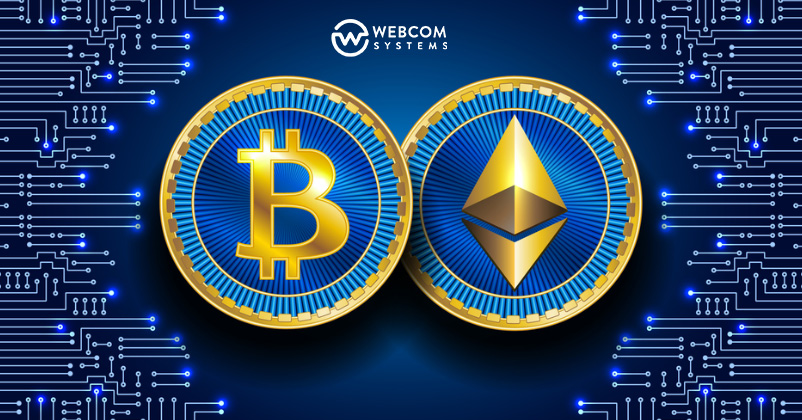 In 2009, Satoshi Nakamoto introduced Bitcoin- a digital currency, which acts as the digital asset, in which the transfer of funds takes place on the peer-to-peer basis without the intervention of any third party.

After a few years in 2015, Vitalik Buterin introduced Ethereum that uses Blockchain Technology just like Bitcoin.

If both the cryptocurrencies are using the same technology, then what is the difference between them? Let us find out;

Top 5 Difference Between Bitcoin and Ethereum:

Basically, Bitcoin was introduced to replace the traditional currency system. Instead of using any government’s currency, the basic intent was to use Bitcoin as the decentralized digital currency.

On the other hand, the main objective of the Ethereum is to act as the programmatic platform, where you can apply and deploy the “Smart Contracts” between the computers.

2. The difference in the Scripting Language and speed of transactions.

The speed at which the transactions are being done is much higher in case of Ethereum than Bitcoin. Usually, it takes 10 minutes to process a single transaction in Bitcoin, whereas in Ethereum it requires near about 10 to 12 seconds to complete a transaction.

3. The difference in types of Blockchain

Bitcoin’s blockchain works on the principle of Proof of Work, where the total 3 transactions can be processed in every 10 minutes. The average size of a single block in the Bitcoin Blockchain is 1 Megabyte.

Ethereum Blockchain provides an open platform where anybody can generate their own tokens using the Smart Contracts. These digital tokens can be backed by the different assets like Gold, Real Estate, Agricultural Land and more.

Whereas in the case of Bitcoin, there is no such platform available in the Bitcoin Blockchain.

Read More: An Ultimate Guide About How Smart Contracts Works

5. The Difference in the cost of transactions.

Clearly, as we can see that Ethereum is giving a tough competition to Bitcoin. However, Bitcoin still has its influence in the Crypto World.

Whereas, the Ethereum Platforms is giving enormous opportunities to the emerging crypto coins so that they can start their own ICO using their Smart Contracts.