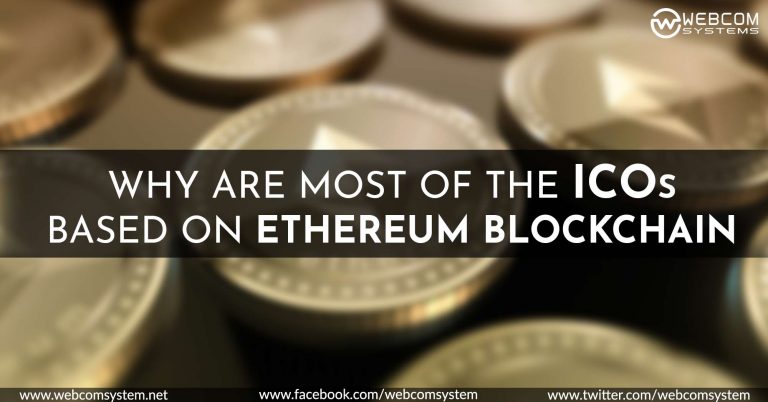 Why Most of the ICOs Based on Ethereum Blockchain?

The year of 2017 has witnessed many new Digital Currencies were; both the emerging startups and established companies are showing a great interest in CryptoCurrencies.

There are a lot of startups who are now following the process of ICO for crowdfunding at the entry level of their business.

According to Bloomberg, the Initial Coin Offerings (ICOs) has raised over $1.3 billion in the last 12 months, this all is happening because of the major two reasons:

#1 The fundraising mechanism of the Ethereum ICOs is much easier than the traditional model of funding from the Venture Capitalist and Angel Investors.

#2 The Ethereum Based Blockchain Technology has opened the new ways to create the new crypto coins or tokens on Ethereum Blockchain without any hustle.

With the concept of the Ethereum ICOs, many startups have raised the millions of dollars just by creating their own tokens and ICO backed by Gold, Real Estate, Agricultural Land and more.

Now the question arises, why are the startups using the Ethereum based Blockchain instead of Bitcoin Based Blockchain for the development of new ICOs? Let us discuss further on it.

Why are most of the ICOs based on Ethereum Blockchain?

Every ICO is backed by some real asset, it can be backed by Gold, Real Estate, Agricultural Land or Forestry.

An ICO is typically an exchange where the project owners tend to sell their tokens in place of the various cryptocurrencies (like Bitcoin, Ethereum) or by any other medium decided by them.

Note: Here is a detailed guide on Top 5 Difference Between Bitcoin and Ethereum

This whole process requires computer programming commands like loops and conditions to distribute tokens, analyze and respond to all the transactions. The core of the ICO is built on the integration of these programs by the blockchain.

But now the question arises, why can’t we use the Bitcoin Blockchain?

The Limitations of the Bitcoin Blockchain

1. Difficult to Write Programs on the Complex System

Basically, Bitcoin Blockchain is comprised of the ledger based on account balances which make the integration process of Bitcoin Wallet quite easy for the ICO’s but it’s quite difficult to write programs in Bitcoin’s currency system which could easily calculate and distribute tokens within ICO.

Therefore, we need a generalized programming state which can handle all these tasks without failure.

The ICO in which there is an involvement of transactions worth millions of dollars, requires the following things:

All these above-mentioned things are perceived and processed by a certain programming system known as the Turing Complete System.

However, a huge problem could arise in implementing such a system which does not accept the programming in loops because loops enable the programmers to verify the data and recalculate entire information.

On the other hand, Ethereum is the Turing Complete System, making it most compatible with all the ICOs.

The process of verification of every single transaction in the Bitcoin Blockchain requires around 10 minutes of time to verify transactions which are quite high. This leads to delay in the verification of further contributions in the ICOs.

The Advantages of Ethereum ICO

Ethereum is the Turing Complete, this means:

Therefore, the Turing Complete System plays a major role in the feasibility of ICOs on the Ethereum Blockchain Platform.

2. ICOs on Ethereum is more Secure

ICOs on Ethereum is more secure because of the Ethereum Blockchain’s multiple program states which allow execution of Smart Contracts to do the following things:

The Ethereum Blockchain is based on the GHOST Platform that allows you to add a new block in no time without any intervention of the blockchain security, thus transactions in the ICOs can be done at a faster rate.

Webcom Systems Pvt Ltd is the pioneer in the Ethereum based ICOs development. Since 2012, we are developing Initial Coin Offerings Exchange Platform for many of our clients. We offer complete solutions for the ICO which will include:

Recommended Read: Proof of Work vs. Proof of Stake:  What’s the Difference?